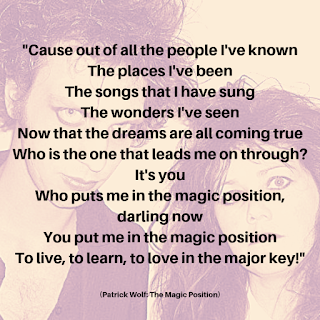 When my husband and I got married 10 years ago, we were under no illusion that marriage would be easy.  While we fancied the pants off each other from the beginning, there was no part of our relationship that was seamless, because each step of it had to be weighed up against questions from bureaucrats, endless paperwork and money.

We’d been together for five years by the time we got married and we’d lived in different countries, spent small fortunes on a variety of different visas so we could stay together in the same country, spent hours discussing whether we were right for each other when we had nothing in common and so forth, and so on, ad nauseam.

We’d covered off the all questions asked in every marriage counselling course from the top of the globe to the bottom. We talked about how our families dealt with disagreements so we were aware of the learned behaviours we’d bring to the relationship. We’d discussed whether or not we wanted kids and what kind of parents we wanted to be. We’d explored the different kinds of ways we spoke of, and demonstrated, love.

We had shared stories of exes, talked about what we wanted from life, agreed on the appropriate way to deal with envelopes that had windows, explained to his mother I hadn’t been married previously – the email address was just wishful thinking about me and Colin Firth.  We’d spent hours on religion, careers, travel, music, tv and movies. We’d agreed that I was the funnier one.

Most importantly, along with love, there was trust and friendship. I genuinely liked my guy.

And ten years on. I still do like, love and trust him.

He also drives me completely spare in ways that I couldn’t begin to imagine when we said “I will.”

Children dramatically alter the dynamic of a relationship when they are real humans and not hypothetical beings. The strength of feeling you have for these small beings that you created together bonds you together in a way that you could not have imagined. You learn to appreciate things about your partner that you never would have realised until you saw him with his own children.

Date nights segue from movie nights and dinners to pizza in front of the television. Your long texts and emails about how much you love each other become brief kisses at the end of the messages asking them when the hell they are going to be home. You register that sometimes you only get to say “I love you”, not show them.

You cover off redundancies. Job changes. Depression. Ill family members. The deaths of friends. The death of family members. Broken limbs. Families visiting. Visiting families. Friendships. Stressful work. Starting your own businesses. Brain bleeds. You tell the same stories you’ve always told. You add new ones. You find things to laugh about. You enjoy a night out. You play to your strengths. You play to their strengths. You value the friends that mind your children so you can catch a movie. You are thankful for the community that rallies around. You adore whoever invented smart phones as you snap photo after photo, memory after memory. You wish you were in more of the photos. Sometimes it feels like you don’t have time to enjoy anything, just note it down for later so you can savour it when you have the elusive ‘time to yourself’.

We argued recently. Angrily, loudly on my part, quietly but no less determinedly on his part. We made up. And I was reminded just one short week out from our ten years that there is still nobody I would rather talk to when my husband pisses me off than…. my husband.

He is my best friend. The person that drives me most insane. The man that makes my world a better place for being in it. He is the mirror that reflects the best of me back to me. The man that has my back no matter how imperfectly human I am.