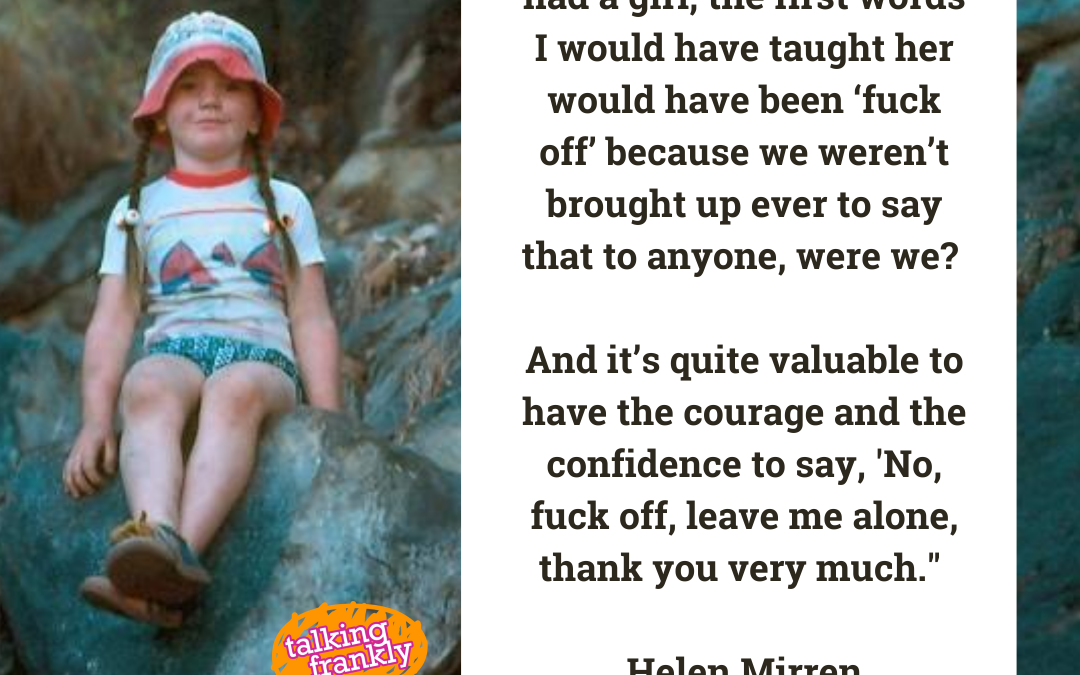 Anybody that has a child will know this phrase. It’s become the ‘go-to’ phrase we teach our children when they are on the receiving end of behaviour that is unacceptable.

And sometimes, granted, it’s the perfect phrase for toddlers. They are testing out their boundaries and what might be amusing to them, is not necessarily amusing to others.  Like scribbling on your picture, or stealing sand from the castle you are building, or sticking their head in front of the book you’re trying to read. They are things you don’t like and you want them to stop it. These are also things which cause little or no harm to either of the protagonists.

But as my girls have grown older, I have become increasingly opposed to this phrase and the way children are encouraged to use it. Especially girls.

Because when you say ‘stop it, I don’t like it’, the entire messaging is that the ONLY reason the behaviour has to stop is because the ‘I’ involved doesn’t like it.  Which is not true.  The behaviour should stop because it is wrong. Full stop.

It opens up a whole world of hurt for the child at the receiving end of the aggression. They are frequently asked to validate why they don’t like being called unkind things, or pinched, or hit, or kicked. All of a sudden, they are the kids that can’t take a joke. The spoil sport. The crybaby. The boy that nobody will hang out with any more because he ruins everything.

I’ve long been a vocal advocate of children setting their own boundaries. If they don’t want to give somebody a kiss, or a cuddle, they don’t have to do so. Even if it’s family and friends. I am also vocal about ‘smacking’ – that’s not discipline – it’s violence. It’s you, the adult, unable to control your own emotions, inflicting physical violence against a smaller human to get them to do what you want them to do.  It’s coercion. Did I always think like this? No. I grew up in the generation where respect was demanded, smacking was normal and we didn’t wear seatbelts. These days I’d be considered a bad parent if I let my kids in a car not wearing their seatbelts. It’s the same with respect and discipline. We learn, we evolve. We do better.

Both my girls know they have both mine and my husband’s full support to channel their inner Helen Mirren, and tell people that are doing them wrong to quite simply ‘fuck off’. And I’ll cop the consequences from the school or other parents on their behalf. They will never be in trouble for standing up for themselves or somebody else. Despite my enthusiastic championing of the direct approach, both girls have resisted all my efforts to get them to tell various people where to go over the years, demonstrating yet again that my kids are much better people than me.  (Also, despite having such a pottymouth for a mother, they are remarkably resistant to using profanity.)

Why didn’t she just leave? Why wasn’t she stronger? Why did she stay after he hit her the first time? Why did she have kids with somebody that was so awful to her?

As parents part of our remit is to protect our children. But there is such a difference between innocence and ignorance.  We can protect our children while equipping them with the skills required to exist in the world safely. And part of that is teaching them that they are allowed to take up space. That they can use their voices. That they don’t have to justify looking after themselves or their friends. There are so many ways that we silence people in the world. We use shame and other social constructs to talk down children. We demand respect without giving it, or better still, earning it.

It’s so ingrained this instinctive behaviour to take up less space. To not be too loud. To have a reason for not wanting negative people in our space. I see it in myself when I try to get the children to move out of other people’s way on footpaths or to let somebody else go first when they’ve shoved in line at the supermarkets. I catch myself asking them to make conversation with people so they don’t appear rude.  But sometimes, they don’t want to talk. Sometimes, the people walking four abreast should go down to two abreast so everybody can share the path. Sometimes, saying “Please don’t push in” needs to be said.

This isn’t a rallying cry for impolite anarchy or to raise a generation of selfish brats. But we need to be aware that in all that we teach our children, we aren’t silencing them. We aren’t raising children that are conditioned to accept the worst from other people and be quiet about it.  We need to be thinking about how we teach our children to take up space in the world, as well as fit in with the rest of the humans taking up space.  We need to be thinking about how we raise our children to expect kind behaviour from others as the default, and not get them to skirt around or ignore unkindness.

What about just stop it?