On Father’s Day this year, I took my daughters to a rally in Sydney in support of the Priya, Nades and their daughter who have been taken into detention by the Australian government and are currently incarcerated on Christmas Island. Their crime? They came to Australia as refugees by boat.

Their story is one of many in what is going to be another dark part of Australia’s history someday. In the meantime, it’s a rotten part of our present where our political leaders trade innocent lives and spin their xenophobia into government policy in return for votes. They are aided in this by an insidious media and most potently, the apathy of the Australian public, who buy into the fear mongering and turn a blind eye to Australia’s blatant disregard for the human rights of so very, very, very many people.

History has taught us time and time again that what your government will do to others is what they will do to you given the chance or the motivation.

But you know my views on this. This particular rally was replicated around the country in major cities and smaller towns. Those that turn up to these rallies are often seasoned protesters who turn up, ever hopeful that change will occur, but equally cynical that anyone listens. The #backtobilo rallies were a combination of seasoned campaigners, and newbies. All people advocating, agitating even, for compassionate leadership.

We know that public activism works. People need to lift their voices, block roads, chant slogans and march in progress to achieve change. It is what has happened for generation upon generation. Activism and change are complex beasts, full of new language to encompass emerging ideas, and often a process of introspection and amplification existing alongside each other.  Allies can not be silent, they must add their voices both humbly and loudly. People without lived experience need to learn to listen and to support, and people with lived experience need to share what are often painful stories in order to educate and inform.  It is not a linear process. It is not an easy process. There is no ‘right’ way.

Change doesn’t happen instantly. One does not wake up one morning aware that one has benefited from a position of privilege and that one has a responsibility to use that in support of those without. It is a challenging of your own truths. The commitment to learning more. The sloughing off of long held beliefs. It’s starting a conversation that nobody is interested in having. It’s being part of dialogues that inspire you and shame you, even as you become better educated. Change is realising that you can never be perfect. That you have made and will continue to make mistakes.

It’s learning that your gut instinct is your learned response. It is the series of truths ingrained in you before you even knew. Change is that second response, the one that pulls up the first response and demands that it explains itself.  Change is knowing the difference between sympathy and empathy.  Change is knowing that a world that only works for you is no kind of world at all. It’s a cocoon, shielding you from reality.

Following the rally, the girls and I headed off to get on with ‘real life’, the one where they live safely. And freely. We get a late lunch from McDonalds before we get on the train. We’ve still got our banners, the girls are still asking endless questions, trying to understand why we lock up refugees. I had no good answers, who does?

In the row in front of us, there is a man I recognised had also attended the rally.  He had rainbow coloured tshirt with a great quote on which was a broader version of my favourite #dontbeadick mantra. It is also a sign of my age that I would describe him as a young man.  Some other people bordered the train and one older guy engaged ‘rainbow shirt guy’ in conversation. In a few stops, it became clear that older guy had differing view.

‘Rainbow shirt guy’ (I do know his name by the way), and I started chatting. The rally had been his first one, a public flexing I suppose of his emerging internal belief system. We had a great chat until we got to our stop and went our separate ways. I told the girls as we walked along that going to a rally on your own was a really hard thing to do, especially if you’re the first of your tribe to do so, and that I hoped they would remember ‘Rainbow shirt guy’ when they were older and that if they really believed in something, they’d have the courage to step out of the comfort zone and stand up for what they believe in. Even if their friends didn’t see the point.

People like ‘Rainbow shirt guy’ always impress me. Young people are getting so much braver, are discovering their voices younger and they manifest that in so many different ways when they come to building a better world, not just for themselves, but for all of us.

Last week I discovered the following message in my blog inbox (Yes, I should check it more often).  And I don’t mind admitting that I cried.  It is an incredibly humbling message. I don’t profess to be perfect. I’m trying as hard as I can. And sometimes, sometimes I wonder whether I make any difference at all. To anyone. Or anything.

But it reminds me so strongly that all of us are changing. And all of us are doing our best.  And I thank J so much for his wonderful words, and the fact that he took the time to write to me, and remind me that it is worth it. We all play our part in making the world a better place.  So I hope he one day he reads this blog again and know that people like him can, and will change the world. Thank you. 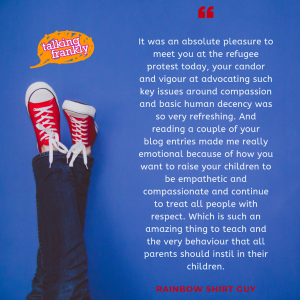