Online platforms are not the devils work 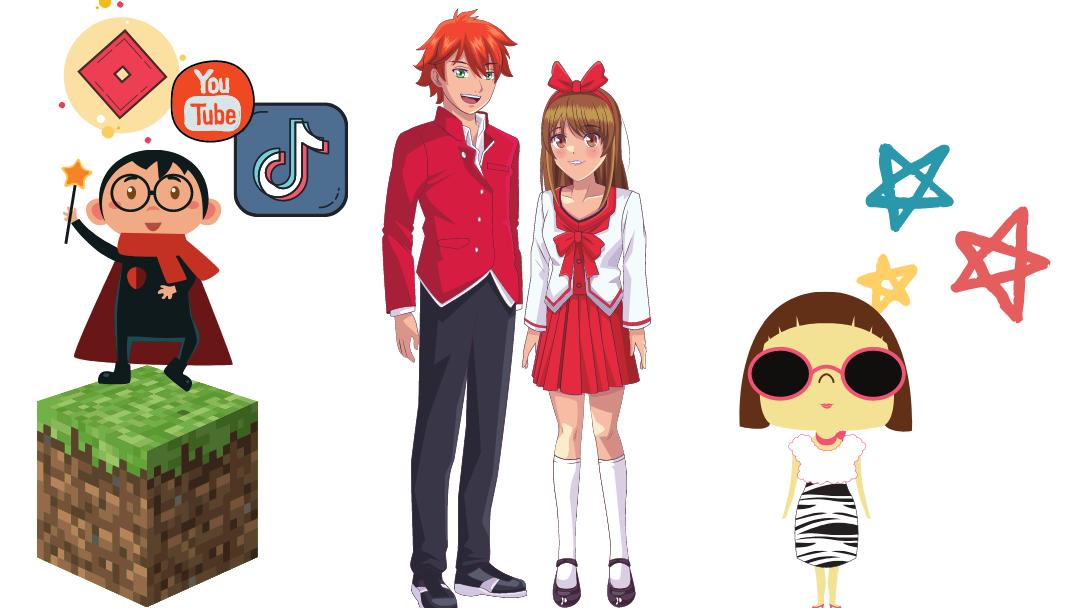 And to be honest, while the last one drives me nuts, at least I have some hope of adding meaningfully to the conversation.

Apart from limiting screen time and making sure appropriate safety measures are in place  so – a) they don’t become at one with the couch and their pyjamas and, b) because we’re the parents and that’s our job – we’re okay with their current obsessions. Despite all things online being cast as the villains in child development and growth in most narratives, I don’t happen to concur with that point of view.

Anything that gets the girls exploring different perspectives and interacting with their peers is a positive.  Games they play on Minecraft and Roblox have had them exploring budgeting, building design and community as they work out what they can afford, who needs to use the space and what infrastructure do they need to support the communities they are building.

An interest in My Hero Academia, Anime and Manga has them exploring different storytelling styles and learning new illustration techniques which they incorporate into their offline art. Big discussions happen around which of their own ‘quirks’ can be considered in a super power.

The recent discovery of Harry Potter means all the books have been read, all the movies watched, and a thousand YouTube and TikTok videos consumed.  We’ve all had to do quizzes to find our HP houses, they have favourite characters and we’ve had a very robust discussion about transphobia and whether or not you can love a book and dislike what an author stands for.   And those conversations were started by the small people in our house. (Not the big ones, we’re still bickering over who is the most tired and who does the most housework.)

TikTok means they have filled my phone with videos of them doing strange dances and various magic acts, but they’ve enjoyed learning the tricks to creating short films and once, as a result of them having fallen down a rabbit hole of American TikTok vidoeos, I found myself and the ten year old having conversations about how Trump talks about Covid and whether or not it’s responsible. (Her view: No. My view: Also no but with more profanity)

I personally think there is a big difference between innocence and ignorance.  There are ways to talk about big topics in ways that are age appropriate and I dislike how societally we shy away from conversations with our children about things that happen in the world that are hard and hurtful. Children are never going to be empathetic towards others if they don’t know that diversity exists – not just in race, religion, gender, sexuality, ability – but also diversity of experience.

Online games or social platforms aren’t evil or wrong. Some just allow the arseholes of the world to amplify their voices. But equally, those very same platforms also allow the voices of people that are good and kind and reasonable to be amplified.  But only if we’re there, on the same platforms that our children are utilising, showing them how to be good digital citizens by modelling that behaviour ourselves. Apathy is not an option when you parent.

Fear and bigotry flourish where people don’t understand each other.  Our children are not growing up in some universe far, far away – we have access to the same games and platforms and we have to be as open to learning as we want our children to be.

So no, I’m not going to ban my children from social media and online gaming. I’m not buying into increasingly hysterical conversations about how everything online is the worst. I’m going to make sure they have the personal skills to recognise what they see online in context, put boundaries in place to look after them as they learn and let them embrace the world they live in which is increasingly digital.

And for sure, I’m going to get it wrong sometimes. That’s true of all the parenting we do from the cradle to the grave.

But I’ve also got to trust in the people that my children are becoming.  Because if I don’t trust that, we’ve got way bigger problems than some chick on TikTok showing my kid weird dance moves